The story began several months ago when Apple’s new executive Angela Ahrendts announced the overhaul of Apple Retails strategy, and I saw pictures then realized the super clean settings underneath the table – there’s no power cord! Now in every picture showed on Apple retail site, you can hardly find any power cord attached to the display table.

How come there’s no power cord? 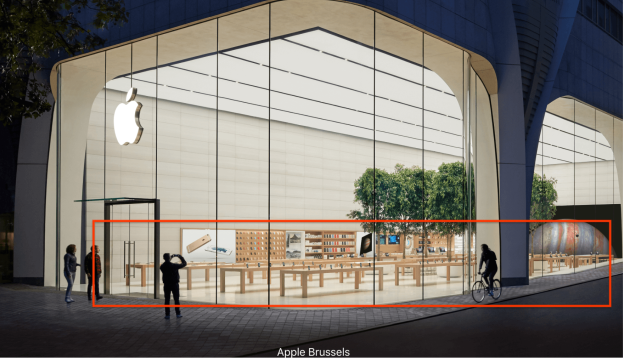 To satisfy my curiosity, the next day I went to Apple Store at Stanford Mall, and found every desk has a coiled power cord coming out from the ground and extended to the middle underneath the table.

“Apple must be cheating in the photographs”, I told myself after later on I visited some other Apple retails and still found all the tables have the same curl cables.

It was not until recently that I happened to visit Apple Park at Cupertino and to my surprised I saw all the full powered iPhones, Macbooks, and iWatchs are presented on the tables without visible cords!

My first guess at that time was all the power outlets from the grounds are purposely designed to be covered by four legs of the table, and the cords are hidden along the table legs. I was able to ask the Apple salesman if she could shed some light if my guess was right. It turned out that she actually has no idea of what’s going on with the power and the table, and she mentioned they moved around the table very often. So it’s unlikely that the table legs are designed to just to cover the power outlets on the ground.

Now my best guess is they use a *big* rechargeable battery inside the drawer of the table to power all the electronics for at least a full day. Staffs, at then end of the day, have to pull out and replaced all the batteries in order to keep things working… If this is true, the amount of work to just keep everything “simple” (as we know it for Apple) is appalling.

I currently design products @Google.
I write in English or 中文 depending on my mode and mood.
Twitter  |  Instagram  |  微博   |  知乎